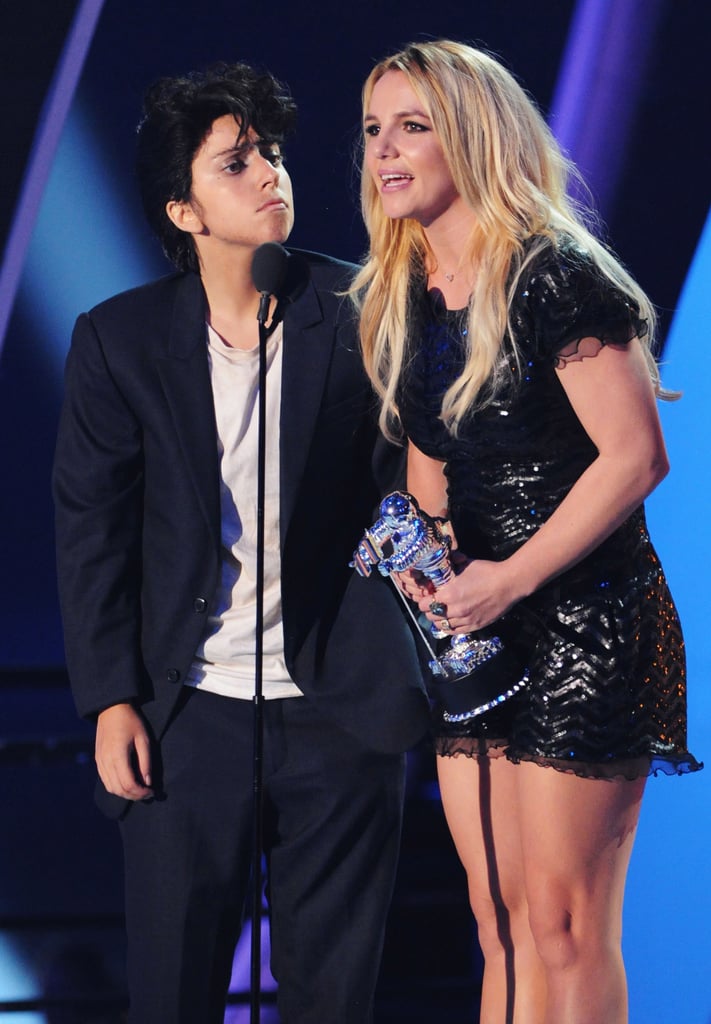 I still hold a sizable grudge against MTV for this whole operation. This is Britney Spears we're talking about! The inventor of Catholic schoolgirl uniforms and red pleather jumpsuits! She's been a flight attendant! She's been on Mars! She's the reason why I pierced my belly button, got a lower back tattoo, and changed my name to Brittney! I'm obviously kidding, but come on. Even if MTV asked Britney to perform and she declined, I feel strongly that they could have assembled something better than a dance medley and an uncomfortably creepy interaction with Lady Gaga — on top of making Britney introduce a performance by Beyoncé, in which she would steal the show by announcing her pregnancy.

Related:
80+ Pictures of Britney Spears That Are Straight Out of a Time Capsule

The consummate sweetheart, Britney grinned and giggled through the performance and played along during the awkward moment on stage with Jo Calderone. She later told MTV what "an honor" it was to be celebrated in such a "sweet" way. "It was really crazy. I had no idea what to expect," Britney said. "The kids were amazing and so entertaining, and it was a really fun night. It was really cool." That Britney may have appreciated the tribute, but this Brittney was at home seething. It just felt disrespectful — not because of how much Britney means to me, but because of how big a part she's played in the magic of the VMAs in general.

I do have to give MTV credit for one thing, though: perhaps after realizing how much it let me down with Britney's tribute, the network decided to make it up to me by not only choosing my forever bae Justin Timberlake as their next Vanguard Award honoree two years later, but bringing *NSYNC back together on stage as well. While I haven't completely forgiven them for doing Britney the way they did, it was a nice consolation.

Personal Essay
Leprechaun Traps Have a 0% Success Rate, Yet Here I Am Making Another One
by Kate Schweitzer 1 day ago

Zoë Kravitz
Hulu's High Fidelity Is Delightful, but I Have One Major Issue With It
by Shannon Vestal Robson 2 days ago

by Murphy Moroney 13 hours ago