Sophie Turner and Joe Jonas Both Wore Red For Their Rehearsal Dinner — Cue the Awws!

Sophie Turner spent the days leading up to her wedding in Paris joining her groom, Joe Jonas, friends, and family for dinners and late-night rendezvous. The bride did wear white, yes, but in the form of a $65 knot front dress that was totally laid-back. That's just the kind of relaxed lady she is, and it shows in her prewedding party gown, too.

Sophie arrived at Hotel Crillon le Brave in South France with Joe, who wore navy pinstripes. Meanwhile, Sophie's fitted sheath was complete with a simple, delicate chain necklace, metallic Jimmy Choo sandals, and a low bun that kept the spotlight on her bridal dress. Sophie's arm tattoos were on full display, which we love, because it made her ensemble feel personal, carefree, and just totally Sophie.

For their rehearsal dinner, Sophie and Joe twinned in bright red. Sophie opted for a figure-hugging red gown with strappy gold Jimmy Choo heels. Joe matched his bride-to-be in a bold red suit. Scroll to get another glimpse at Sophie's outfits, then check out the silk white Bevza jumpsuit she wore for her celebratory ceremony in Las Vegas months back. If these two numbers are any indication, Sophie won't be walking down the aisle in a floor-trailing train or long, intricate veil. Instead, we might see her in something sleek and figure-hugging — perhaps something Nicolas Ghesquière created for her from Louis Vuitton? 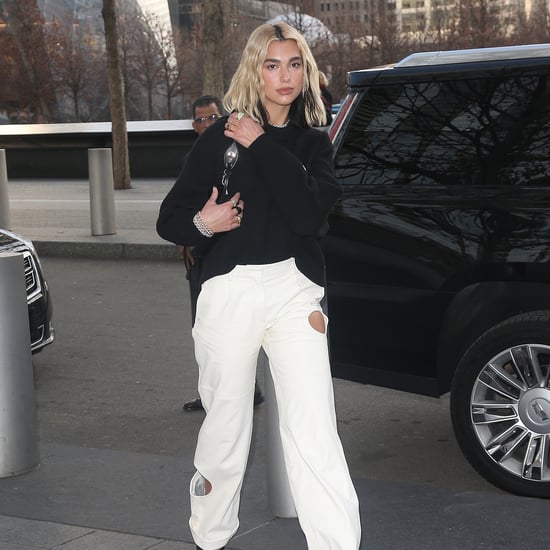 Lizzo
Lizzo's Body Positive Moment Comes With a Metallic Cutout Swimsuit — Shouldn't They All?
by Sarah Wasilak 16 hours ago