Katelyn Ohashi was UCLA's anchor on floor at the April 20 team portion of the NCAA Gymnastics Championships. UCLA came in third behind LSU and title-winners Oklahoma, but the senior brought down the house with this farewell routine that earned her a 9.95. She opened up with her incredible split leg double layout, was all smiles while dancing to Beyoncé's "Run the World (Girls)," and ended with an iconic mic drop. Watch her perform for the last time above.

In case you haven't heard the name Katelyn Ohashi by now (um, how?), we'll give you a recap to catch you up to speed. After a decorated Olympic-bound career on the elite level marked by emotional and physical pain, Katelyn transitioned into the world of collegiate gymnastics. She found her joy in the sport again thanks to UCLA and its head coach, Valorie Kondos Field, also known as "Miss Val." Katelyn is the best in the nation on floor, with six perfect 10s this season, and it's not just her technique that equals perfection; it's her smile and infectious dance moves, too.

Katelyn's Michael Jackson-inspired routines from 2018 and 2019 have gone viral. So viral, that she says she now gets stopped on the street, and celebs like Janet Jackson have retweeted the performance. Katelyn, a senior gender studies major, recently eliminated MJ's influence from her music and choreography due to sexual abuse allegations detailed in HBO's Leaving Neverland documentary (read more about her decision to do so here). She debuted her new routine, set to a lineup of all-female artists including Tina Turner and Beyoncé, at the Pac-12 Championships in March.

"I never would have wished for this to happen any earlier because I wouldn't have been ready for it," Katelyn told Marie Claire of her viral fame. "I have grown so, so much and stepped into who I want to be in the future." She's open about mental health and body image on her website Behind the Madness, but, she told the outlet, "I've been waiting for my platform to get to this point. I've always been sharing this stuff — I just have a lot more ears now." Katelyn further told FloGymnastics after the team semifinals Friday night that she thinks she's in a "really good place" as her senior year comes to a close. Congrats on an amazing career, Katelyn! We can't wait to see what you accomplish next.

Workouts
Can Weights Get You Better Abs? An Expert Says Yes — Here's How to Use Them the Right Way
by Maggie Ryan 3 hours ago 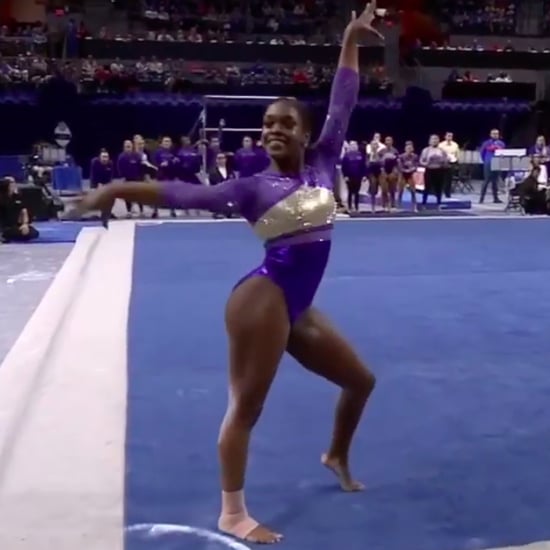 Gymnastics
This LSU Gymnast Is Only a Freshman, but Her Billie Eilish Floor Routine Is Worthy of a Crown
by Karenna Meredith 49 minutes ago

Workouts
I'm 3 Weeks Into This At-Home Workout Program, and I'm Feeling Stronger Every Day
by Dominique Michelle Astorino 1 day ago

by Karenna Meredith 49 minutes ago